Organizations have begun experimenting with blockchain technology for a range of use cases including monetary remittances, academic credentialing systems, land title systems, and tracking the origin and provenance of products. Yet, Gartner estimates 90% of enterprise blockchain projects launched in 2015 will fail within 18 to 24 months.

Part of the problem is that the majority of enterprise blockchain projects don’t actually require blockchain technology. In fact, these projects would probably be more successful if they did not utilize blockchain.

Blockchain technology is at the Peak of Inflated Expectations on the Gartner Hype Cycle, which means that the Trough of Disillusionment is still to be navigated. CIOs should be aware of the common mistakes that can lead to disappointment and failure in enterprise blockchain projects.

“The current generation of technology platforms have significant limitations in multiple areas that will result in their failure to meet the requirements outlined in the long-term vision,” said Ray Valdes, vice president and Gartner Fellow. Many enterprises are still jumping on board the blockchain bandwagon and for most, disappointment will be the next phase.”

However, simply knowing where the frequent points of failure exist can help enterprises avoid falling into the same traps.

Gartner CIO Forum
Gartner analysts, and industry leaders will discuss key issues facing the CIO during Gartner’s CIO conferences taking place February 21-23 in Phoenix, AZ, March 13-15 in London, March 19-21 in Hollywood, Florida, May 18-19 in Munich and June 6-8 in Toronto. You can follow news and updates from the event on Twitter using #GartnerCIO.

Gartner Top Predictions: The Future Is a Digital Thing

The increase in API-driven, programmable digital resources has created a revolution in machine independence and the beginning of a robo-pandemic…. 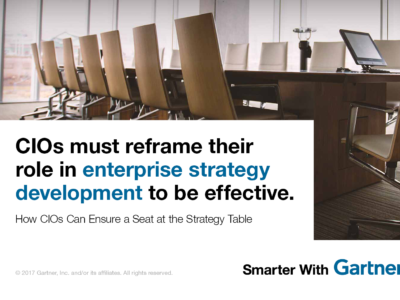